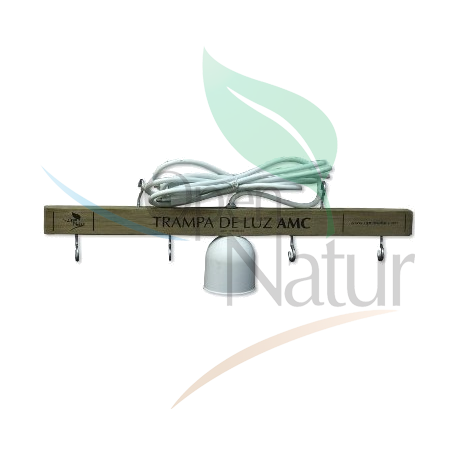 1. Light trap for chromatic plates, of the type of plates consisting of plates or bands of color that impregnated with a sticky substance attract and selectively capture the insects that are attracted by said color, characterized by the fact of comprising a configured support preferably as a bar, made with any suitable material, in whose lower part it incorporates a plurality of hooking elements, such as sockets, apt to receive and hang the chromatic plates in which said bar or support also incorporates one or more light sources, as well as as hanging means for placement in the place that suits. Light trap for chromatic plates, according to the claim, characterized in that the light source or sources that the support incorporates can be constituted by a light bulb, which is joined to the support by means of a hole made in said support, by which it passes through the cable and into which the bulb holder to which the bulb is attached is inserted. Light trap for chromatic plates, according to the claims, characterized in that for the supply of said light sources, the incorporation of the corresponding connection and plug cable for its connection to the network is envisaged, or optionally, its connection to a or several small batteries of suitable characteristics, located adequately protected on one side of the said support bar