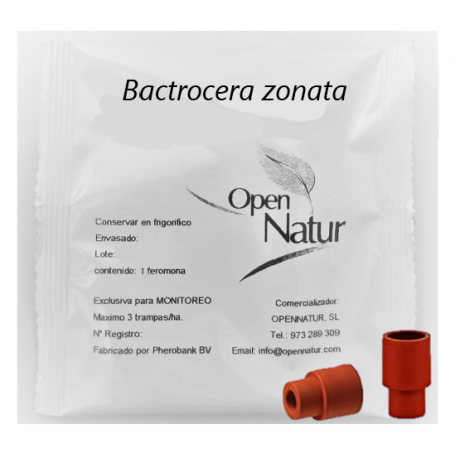 Host plants: polyphagous, infesting many species of plants, mainly those with fleshy fruits.

Morphology: The worm is creamy white, without legs, elongated and can reach a length of 7-10 mm. The anterior end narrows, the caudal segments thicker, with a pair of posterior spiracles. The color of the adult is orange brown, the wings without a crossed band, the male with a pair of dark mushrooms in the shape of a spatula on the head.

Life cycle: a female produces about 130 (and up to 550), which are inserted into the host's fruit and hatch within 1-3 days. The larvae feed for 1-2 weeks and fall (sometimes "jumping") to the ground, to the pupa (entrance / Pupa) on the ground. They spend the winter in the stages of larva or pupa. The lowest development threshold is around 15 ° C, and the optimum is 25-30 ° C. Depending on the climate, PFF can generate several generations per year. It remains active throughout the year (except in mid-winter) and is a strong aviator, traits that increase its dispersion and increase its danger.

Economic importance: the PPF attacks many fruit trees and is an important pest of peach, mango and guava.

Monitoring: Bactrocera zonata can be monitored by several traps

Bactrocera zonata Saunders, belongs to the family Tephritidae and is commonly known as the peach fly, it is considered an important quarantine pest for many countries of the Mediterranean Basin and the Near East.

B. zonata is a polyphagous species, less than Ceratitis capitata, but with a great ability to adapt to different environmental conditions. Its main hosts are guava (Psidium guajava), mango (Mangifera indica) and peach (Prunus persica). Likewise, 42 different species of guests have been detected worldwide, among them: papaya, cherimoya, bitter orange, lemon, orange, grapefruit, tangerine, melon, cucumber, medlar, fig, tomato, apple, avocado, date, apricot , pomegranate, pear and eggplant. B. zonata in its adult state has the size of the house fly (Figure 2A). It is reddish brown, with transverse abdominal bands of yellowish color, transparent wings with a small brown spot at the end of each wing. The main regions of this dipteran are described below: Head. It presents a point on each side in the antennal sulcus, above the buccal apparatus (Figure 2B). Chest. The mesothorax or second thoracic segment (escutum) presents yellow stripes laterally and the yellow postpronotal lobe; In addition, it presents anterior supra-alar setae, acrostic mushrooms and two scutellar setae (Figure 2C). The wings have an incomplete costal band, marked with a dark point at the apex. They are transparent and lack microtrichia (Figure 2D). Abdomen. With a pair of dark markings in tergite III and no dark midline, except in tergite V. The males present a tuft of hair called (pecten).

Damage: In the areas where it has been established, it causes, in the peach and guava crops, 100% losses of the crop in the untreated fields, which may reach 30% in the insecticide-treated ones. It has a great capacity of dispersion, in the islands of the Pacific have been invasions between islands to more than 50 km. In marked and recapture experiments, adults were recaptured at 25 km from the release point. It can be dispersed, therefore, very quickly in new areas looking for food or host fruits to perform oviposition. The dispersion is slower if the pest has food and host plants in the area. The dispersion of B. zonata is produced not only by the flight of adults, but by the wind and by the movement of infested fruits produced by man.