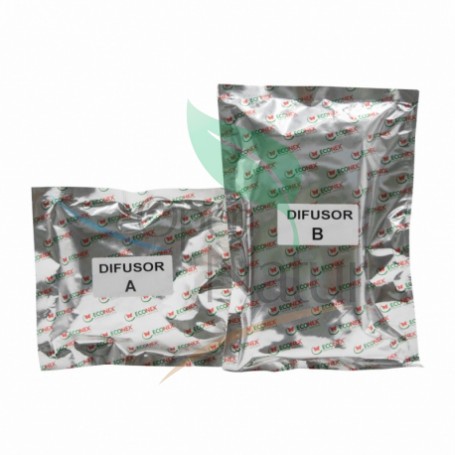 PRESENTATION: The diffusers are blister-shaped with a layer of polyolefin permeable to the active ingredients, and are individually packaged in aluminum envelopes. Once removed from their containers, the diffusers do not need any activation operation, just place them properly in the trap. DO NOT OPEN, CUT OR DRILL THE BLISTERS, the emission at the appropriate rate is achieved by diffusion through the polyolefin layer.

In forest stands we will place 1 CROSSTRAP® or CROSSTRAP® MINI trap every 20 ha, separated from each other by at least 1000 m. In areas less than 20 ha, at least one trap per stand or forest mass will be installed. The traps will be installed in places with good visual accessibility, such as forest edges, forest tracks or firebreaks. Especially windy places will be avoided, since the flight of the insects is difficult and could cause breaks in the traps. A detection trap should cover the environmental variability of the forest to be monitored.

The traps must be installed and operational between mid-September and mid-April, generally. These periods could be shorter in years with very warm early autumn and early spring.

To make an exhaustive follow-up we must place the traps at a distance between 100 and 500 meters from each other, following forest tracks, firebreaks or forest edges.

The density of traps may range between 0.3 and 3 traps per ha. They can also be installed inside the forest, as long as it is not too dense.

For exhaustive monitoring, dry capture is recommended, using the collector with mesh bottom and treated with slider. This collector prevents the escape of the scolitids, since they can not climb the slide, but allows the entry and exit of the predator Thanasimus formicarius, which will devour the catches. In this way the impact of trapping on the useful fauna is minimized

In parks, gardens and residential areas

The management of Tomicus destruens in parks and gardens presents some peculiarities that differentiate it from management in forest environments. The greatest risk of attack on ornamental trees is that induced by mechanical damage.

Attacks are very frequent due to more or less severe destruction of roots, caused by works that involve excavation in the environment of the trees. Generally ornamental trees are not very susceptible to attack by Tomicus destruens, provided that the conditions in which they have grown are maintained. Sometimes putting or removing watering in garden areas can induce the attack of these insects.

The control of Tomicus destruens in these circumstances must be very effective, since it is about reducing the mortality of trees to zero. Therefore, the trapping effort should be intensified to the maximum, so that densities of 3 traps per ha can be used, which should be controlled weekly.